The release of a massive add-on for TES Online, the theme of which was all the beloved Morrowind, could not help attracting the attention of fans of the main “single” series. It is The Elder Scrolls 3 that is still considered to be fans of the undying classics from those times when the grass was greener, and the scuma was being sold everywhere. And it should be said that the online version of Morrowind creates exactly the atmosphere that was expected of it.

Swim up to the pier of a village called Seyda Neen, you will surely remember why you are so fond of these places. Everything in the surrounding landscape brings you back to 15 years ago, at the time of the release of the third part of The Elder Scrolls, dedicated to adventures in the world of Dunmer. Standing in the marshes buildings of rough gray stone, giant mushrooms and even a small port warehouse say that you have finally returned home. However, it is worth remembering that the add-on events occur long before the events of The Elder Scrolls 3. 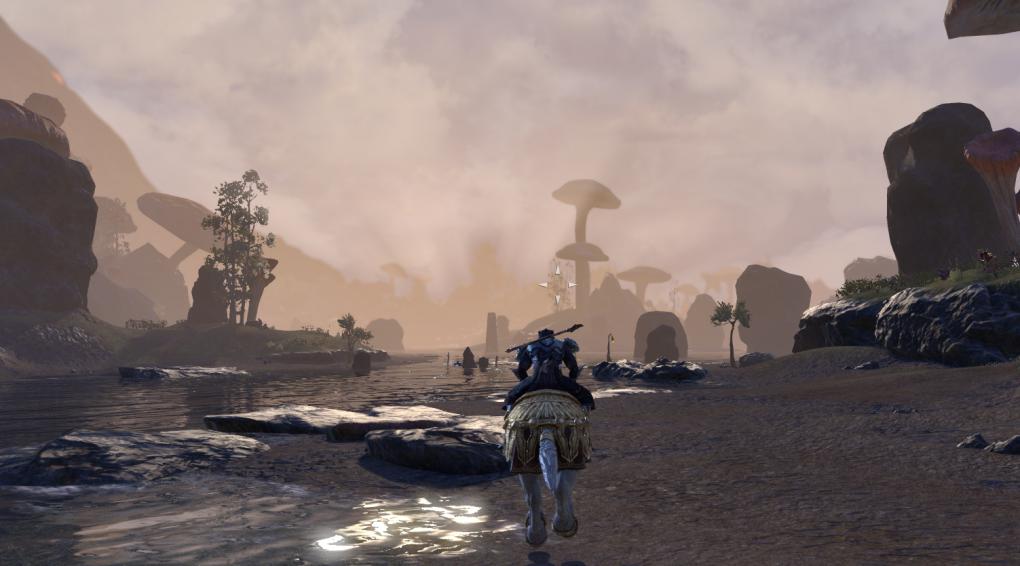 The action of the online version of Morrowind unfolds seven centuries before the event in the original game. Vivec is still under construction, and the Red Mountain is quieter than ever. The zones of influence of the great houses are distributed differently: at the head of practically the inhabited world of the region is Redoran, and other houses only claim power. However, a lot will still be familiar to you. Most of the landscape attractions from the original are carefully transferred to TES Online. As a result, Morrowind has an interesting fusion of the old and the new, which will allow you to simultaneously learn more information about the ancestral lands of the Dwemer and start a tearful tear, looking at the lovely hillocks and remembering the only stories that are important to you. The Elder Scrolls Online: Morrowind generally plays very strongly on the feeling of nostalgia. So, it will be possible to meet old acquaintances, including the living god Vivec, who will need help with several problems.

Morrowind demonstrates once again that TES Online is one of those rare MMORPGs that relies on the storyline. In addition, you can find several key stories in which you have to figure out. In addition, there are several dozens of no less interesting side lines. And these are not ordinary short assignments. On some of the plot branches will have to spend a lot of time and effort. One such is a chain of quests about the liberation of slaves, which can rightly be called one of the longest among similar games in the genre.

To learn about what is happening in this world is like reading a good book. Virtually everything that Morrowind can show you can be seen in three dozen hours. Although, like in any MMORPG, this time can easily be stretched in half or twice. It may seem that this is not much, but the creators of the add-on bet on the quality, and you will definitely say thank you that you will not have to kill another herd of wild boars ten times.

New mechanics in addition, however, not too much – affects the emphasis on the story. One new class called Warden is made, apparently, in order to give players the opportunity to be “Warden”: it can and treat, and damage the enemies, and even tank. However, all this is obtained from him on an average level – the class does not have pronounced weak or strong sides. On the other hand, he can call a war bear, which, unfortunately, is absolutely useless in PvP. This somewhat limits his popularity in the game.

In addition, with the release of additions to The Elder Scrolls Online appeared Battlegrounds in three forms: Domination, Deathmatch and Capture the Flag. In fact, they are clashes of different factions in small arenas. Nothing special, but this innovation definitely will please those who would like to fight not only with the surrounding world.

For those who do not like to pick up an ax and aimlessly crumble live rivals, there is a new raid dungeon – Halls of Fabrication. It is such a Dwemer land with entertainment for every taste, from a lethal environment to those who seek to crush you with huge constructs. The dungeon is really difficult, so preparing for its passage is necessary with all seriousness even to experienced players. It is calculated for 12 people, and it also has its own interesting story.

And, of course, Morrowind has become more beautiful than ever. The picture of TES Online has become even more pleasant, recreating the stunning atmosphere of gray, but such a charismatic world. And the music did not disappoint. It’s time to start again to admire the sunsets of Balmora!