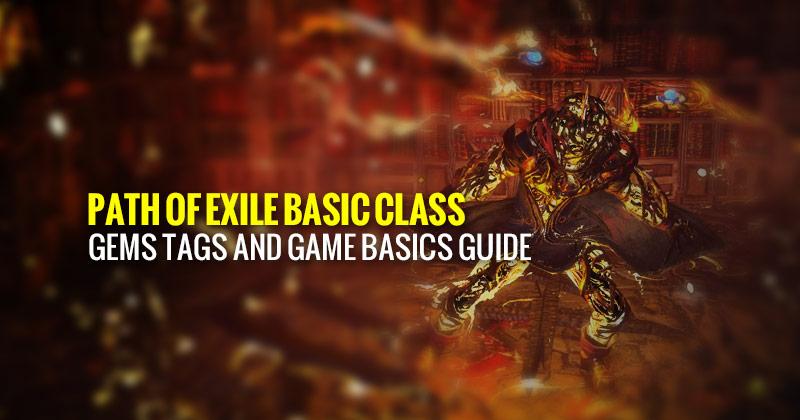 Many new players who join the Path of Exile game will have questions similar to the following:
“Is this physical damage or spell damage?”
“How many monsters can this spell attack at one time?”
“Can Chaos Damage Critical?”
These kinds of questions are actually very difficult to answer because the questions themselves are wrong, we have to start with the game mechanics

In order to facilitate understanding, I will first group Skill Gems by tags to roughly categorize active skills by action type:
1. Attack (including finely classified tags such as an attack, melee, bow, and arrow)
2. Spell
3. Special Actions (Basically Illegal Casting Skills, War Cry, and the like-War Cry originally belonged to spells. Later, for game balance, GGG classified the War Cry separately. In this way, you ca n’t release the injury and release it firmly. War roar)

As you can see from the gem label, attack or spell, these are the two main categories that distinguish gems.

Then, let’s talk about the basic settings of the game.
In Poe, the output methods are divided into the attack, spell, and continuous damage.
This sentence can be seen in the tips during cut scenes. In fact, the “attack” and “spell” in this sentence are not the same as those in the gem label above, because the output mode of normalization is continuous damage but still belongs to spells. This sentence should strictly be speaking Yes: The output method is divided into hit attacks, hit spells, and non-hit continuous damage.
In short, the important thing to know is that attack and spell are opposites.
The specific types of damage are divided into physics, elements (three types of ice and fire), and chaos.
The output method and the damage type can be freely matched and combined.
In Poe, there can be physical attacks, elemental attacks, and chaotic attacks, as well as physical spells, elemental spells, and chaotic spells.
So please don’t bring in the common sense of other games and say:
“Is it physical damage or spell damage?”-Physical damage and spell damage are not in a concept, and they are not a relationship of “right and wrong”! There are physical spells in POE, such as knife array, knife rain, and shockwave totem!
“Is it a spell attack?” —— Spells are opposed to attacks, so strictly speaking, you ca n’t call it that in POE. It should be “Is it a spell output?” And “attack”, rather than the general term “attack” in common sense, includes “spells” and narrowly defined “attack” in POE, which is too confusing to say. So it is necessary to introduce the concept of “output”. In POE, please also try to avoid “my so-and-so spell attack power is too weak” This way of speaking still retains the general concept of “attack” in common sense.

Critical strikes are not critical strikes. They are determined by hit skills, that is, those attack and spell skills that are side by side with continuous damage.
Don’t come up with a damage type of “Chaos Damage” and ask if it can crit? The answer to this question is not to know! Because light comes out of the chaos damage type, it can’t tell what action effect it is, it may be a hit attack, it may be a hit spell, or it may just be continuous damage such as poisoning. When it is poisoned, there is no crit without hitting.

When it comes to hits, let’s talk about this setting again.
In this game, hits are common, and most attacks and spells are hit.
The hit of the attack depends on the hit rate.
For spells hit, the default hit rate is 100%. It still only needs contact to hurt. There are some slower projectiles. If you avoid it, you will miss the verdict.
In short, after the skill contacts the enemy, the hit judgment is made, and the hit judgment is successful, and then other probability judgments such as blocking and crit and the penetration chain related to the projectile are performed.

Let me repeat it here. I used a tongue-in-cheek statement to say “This sentence should be strictly speaking: the output method is divided into hit attacks, hit spells, and non-hit continuous damage.” It is to avoid confusion. For example, the fire of righteousness (hereinafter referred to as Righteous Fire) mentioned above has its own magic label. It belongs to spells in the action type of active skills (skill type for short). but! Its damage is non-hit continuous damage. This also resulted in that Righteous Fire can be released by injury, because its skill type is a spell, and what can be released by injury is spell; but Righteous Fire does not accept spell bonus, because, in the output mode, it is non-hitting type. Sustained damage.
So, here I distinguish the “attack/spell” in the output method from the skill type. When talking about the output method, it should be classified according to the hit or not, especially the hit attacks and spells. For example, the physical split arrow attack caused poisoning. This output should also be viewed in sections. It is divided into the attack/spell section of the hit type and the second section of the continuous damage. These are two different output methods. When talking about skill types, we directly say that the split arrow is an attack skill and Righteous Fire. It’s a spell skill.

The above is the basic setting of POE. We must first understand what an attack is and what a spell is before we can further study more advanced mechanisms of this game.